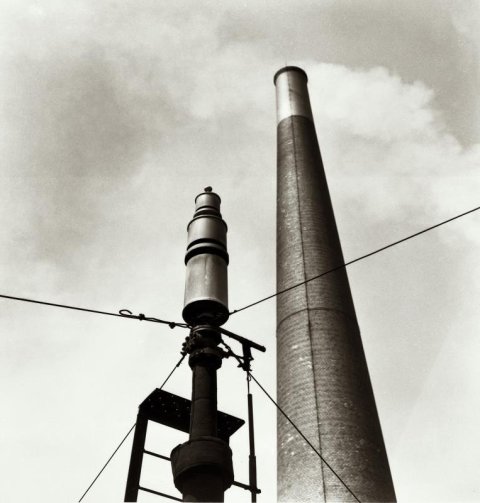 Beginning with the establishment of Kodak Park in 1891, a factory whistle was used to alert employees of the beginning and end of their shifts.  The whistle is a replacement for the original 1891 model and was purchased by Eastman Kodak Company in 1916. Built by the Union Water Meter Company of Worcester, Massachusetts, the “whistle” is actually at 3-Bell Steam Gong and is tuned to hit the first, fifth, and eighth notes of the music scale.  Originally the whistle was operated using 135 pound steam and with its relocation will be run on 140 pound steam.

In its original placement atop Building 31, the whistle signaled shift start and end times as well lunch hours. In the early days it was also used to summon the fire department to certain buildings. During World War II, blasts from the whistle would signal air raid drills and was used for civil air defense alerts into the 1960’s. With an effective range of 10 miles, the Kodak Park whistle became a mainstay of neighbor’s lives. Many people used the regular blasts to tell time. That’s why the news that their “old friend” would be silenced at 5pm on August 8th, 1964 was met with sadness and even contempt.  Upgrades to the park’s communication network and staggered lunch hours made the need for a factory whistle a thing of the past.

For Kodak’s 100th Anniversary, the whistle was re-installed on Building 31 and ceremoniously blown on June 14th, 1991. Due to years of not being used and maintained it failed to sound for that ceremony, releasing nothing more than a rush of steam. For the Building 371 Ribbon Cutting Ceremony held in July, the whistle has been fully restored by RED’s steam and electric maintenance team returning it to its prior glory both in appearance and sound.  The whistle has been mounted on the south side Bldg. 321, approximately 30 feet in the air.