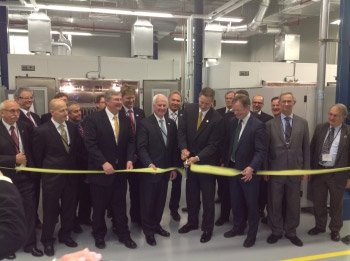 “Bringing high-tech innovations to market is part of how NY-BEST is continuing to drive economic activity and create jobs in the Rochester area," Governor Cuomo said. “With the opening of the new Test and Commercialization Center, this public-private partnership will provide more of the tools needed to convert the ideas of our State's brightest innovators into products that strengthen our energy grid and grow the economy. I congratulate NY-BEST on this milestone, and look forward to seeing them lead the way in the development of new energy storage technologies."

Lieutenant Governor Robert J. Duffy said, “This new, operational center builds upon New York and Eastman Business Park's manufacturing and technology expertise, and thanks to Governor Cuomo's vision, we consistently remain at the center of this growth. Rochester continues to grow and develop in symbiosis with the Eastman Business Park, and I congratulate NY-BEST and DNV GL on officially locating to the BEST Test and Commercialization Center." 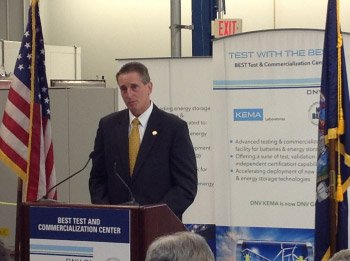 The new BEST Test and Commercialization Center offers product development services that are essential for researchers and companies alike to test the viability and performance of innovative energy storage technologies before they are introduced to the marketplace as new commercial products. These services can be difficult for individual companies to procure within a reasonable geographic proximity or at a reasonable cost, and include: testing for small single cell batteries to larger megawatt systems, product development, performance validation, certification testing, environmental testing and battery lifetime testing, mobile in-field testing and on-site product commissioning.

It was created through a partnership between the New York Battery and Energy Storage Technology Consortium (NY-BEST), a consortium of more than 130 industry, academic and government partners, and DNV GL (formerly DNV KEMA), a global company with extensive energy advisory, testing, inspection and certification expertise. Energy storage technologies, such as batteries, ultracapacitors, fuel cells and flywheels are being used to increase efficiency and reliability on the electric grid, as well as in transportation, buildings, and portable electronics where they are helping to drive a cleaner, more sustainable and secure economic future.

Governor Cuomo announced the partnership between NY-BEST and DNV GL (formerly DNV KEMA) to create the Center in July 2013. The $23 million Center is being funded through an investment to NY-BEST of $5.9 million in funding from the New York State Energy Research and Development Authority (NYSERDA), $1 million from Empire State Development, as well as an investment of up to $16 million by DNV GL. As part of its investment, DNV GL is re-locating its existing energy storage testing capabilities from Pennsylvania to New York.

Dr. William Acker, Executive Director of NY-BEST said, “NY-BEST, together with our partner DNV GL, is proud to announce that the BEST Test and Commercialization Center is open for business. Many global leaders in energy storage technology research and development and manufacturing call New York home. By filling an important gap that currently exists in the product development process for batteries and energy storage technologies, the Center will serve as a magnet to attract and grow the energy storage industry here in New York. We are extremely grateful for the support of Governor Cuomo and our New York State partners and we are excited to work with DNV GL as we commence operations."

NY-BEST selected DNV GL as a partner to operate the Center through a competitive solicitation. DNV GL, an energy powerhouse that unites the strengths of DNV, KEMA, GL Garrad Hassan, and GL Renewables Certification, was the selected partner, due to its strong heritage in global testing, inspection and certification as well as its expansive scope of capabilities in the electric grid and renewable energy consulting business.

Executive Vice President of Energy Advisory for DNV GL Energy Hugo van Nispen said, “DNV GL is committed to the success of this laboratory which will provide meaningful support along multiple dimensions, as distributed energy resources and renewables increasingly impact the grid. Leveraging the finest state-of-the-industry testing equipment and procedures, we aim to help our customers drive the marketability and efficacy of new storage technologies and applications to address challenges and opportunities associated with the ongoing energy transition. We are pleased to invest in this distinctive lab which is built on a 150 year heritage in independent testing and fortified with comprehensive commercialization services from product development to market analysis, feasibility studies and beyond."

President and CEO of NYSERDA John B. Rhodes said, “We congratulate NY-BEST and DNV GL on the opening of the BEST Test and Commercialization Center. The Center is another example of Governor Cuomo's efforts in scaling up the State's cleantech sector and stimulating economic activity in the Finger Lakes region. The work that will take place at the Center will lead to battery and energy storage innovations that can help make the State's energy system operate more efficiently, effectively and with greater resilience."

Empire State Development President, CEO & Commissioner Kenneth Adams said, “Today's grand opening makes it clear that Eastman Business Park is one of the nation's premiere sites for the testing and commercialization of next-generation energy storage technologies. This state-of-the-art test and commercialization center is the product of a strong partnership between Governor Cuomo, Rochester and Kodak and I am pleased that Empire State Development could contribute $1 million to make it a reality and further grow the clean energy economy."

Assembly Majority Leader Joseph D. Morelle said, “Today's official opening of the NY-BEST Test and Commercialization Center marks yet another important step forward in the rebirth of the Eastman Business Park. With the support of public-private consortiums, such as NY-BEST, and partnerships like the one created with DNV GL, we will continue to strengthen our region's position as a leader in innovative energy technology development and ensure a bright future for the Business Park. I applaud the Governor, the Regional Economic Development Council and all of our local partners for coming together in support of this project."

State Senator Joe Robach said, “The addition of the BEST Test and Commercialization Center to Eastman Business Park is great news for the Rochester region and the continued improvement of our local economy. Eastman Business Park continues to re-invent itself in to a national research and innovation hub, attracting new businesses and creating new jobs for our workforce, with the BEST Test and Commercialization Center being the latest to invest in the Rochester community."

President of Kodak's Graphics, Entertainment and Commercial Films group and Senior Vice President of the company Brad Kruchten said, "We are excited that NY-BEST and DNV GL have joined us at Eastman Business Park, to build upon our unique innovation ecosystem that leverages more than 100 years of expertise in technology and materials science. EBP is fast becoming a New York hub for clean, alternative energy. Now with the BEST Center open for business, companies can test and build their energy storage devices using our unparalleled infrastructure, including world class analytical equipment and pilot coating facilities, saving millions of dollars on the road to commercialization."

President & CEO of the Greater Rochester Enterprise Mark S. Peterson said, “The public-private partnership model utilized to establish the BEST Test and Commercialization Center is a smart, strategic way to build our economy. Companies that utilize this new center will have access to the intellectual horsepower, manufacturing and test capabilities that have long been the Rochester region's competitive advantage."

The BEST Testing and Commercialization Center is part of a comprehensive strategy to catalyze, attract and grow the energy storage industry in New York. An Economic Impact Study commissioned by NY-BEST estimated that the energy storage sector currently employs approximately 3,000 people in New York State and is responsible for more than $600 million in annual global sales. The study found that the sector could grow more than 11,400 new jobs in New York by 2020 and 43,000 new jobs by 2030.