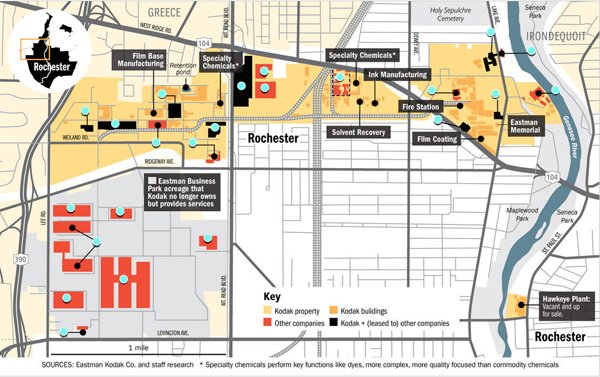 Image by the Rochester Democrat and Chronicle

An interesting website developed by a local newspaper charts the history of Eastman Kodak Company’s 1,200-acre research and manufacturing facility in Rochester, NY – the former Kodak Park. The website talks about a time when Rochester called itself the “World’s Imaging Center,” and people pointed to Kodak Park as the iconic center of that universe.

A large interactive map highlights many of the buildings on the sprawling campus, and describes in both words and pictures each building’s function through the years. Today, the campus is called Eastman Business Park, home to a growing number of companies not named Kodak, but who nonetheless are taking advantage of the Park’s unique infrastructure and facilities to advance science in the areas of thin films, biofuels and energy storage.

The website points out that, as the “new” Kodak continues to emerge, the new Eastman Business Park is continuing to evolve, serving as the catalyst for the commercialization of new technologies and products in the materialsscience space. The legacy that was Kodak Park is not lost on this next generation of innovators. They include a solar technology firm, a company that converts carbon dioxide into polymers, a battery and energy storage commercialization center, and a company that is making sensors for a variety of touch applications.

And that’s just the beginning. “There’s a lot of stuff in the pipeline,” stated Greater Rochester Enterprise President Mark Peterson, who points to Kodak’s emergence from bankruptcy as a reason many upstart technology companies are considering making the move to the complex. Then he states with confidence: “The Park will be a stalwart of economic development for this region for a number of years to come.”

View the park’s transformation through the years, from the perspective of the Rochester Democrat & Chronicle,