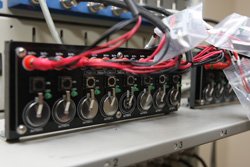 Construction has begun in an 8,400 square foot portion of Building 320 at Eastman Business Park, where a battery and energy storage company that was founded in Ithaca, NY established corporate headquarters and manufacturing operations in August 2013. 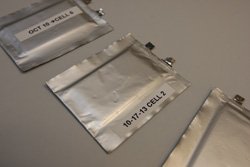 The NY-BEST commercialization center was a key reason why NOHMs chose Eastman Business Park for its research and manufacturing operations. The commercialization center is where companies and universities can go to create prototypes for new energy storage and delivery systems, test them, do pilot manufacturing and then get business assistance to take those products to market.

In an interview, Nathan Ball, NOHMs founder and CEO stated that the commercialization center “helps NOHMs and other companies like ours, with testing facilities where we can get world class analytical equipment, pilot coating facilities that represent millions upon millions of dollars that have already been invested by Eastman Kodak for our use, and the cycling testers which NY BEST plans to install here.”

“This is equipment NOHMs doesn’t have to buy, that we can leverage and use on an as-needed basis and save a tremendous amount of money on the road to commercialization,” Ball said.

There is another reason why Eastman Business Park stood out over locations in Michigan, Georgia and Texas.

“The availability of a highly skilled and talented workforce in Rochester played very heavily into our decision,” said Ball, who founded NOHMs in 2010 following research into the use of nanoparticles in lithium batteries that can deliver three times the energy density at a third of the cost.

“Rochester has a long history of experience in materials science,” Ball said. “In fact, we have already hired three engineers from the Rochester area who were making the trip to Ithaca every day. Their commute just got shorter.”

“We are excited that NOHMs is joining us at Eastman Business Park, to continue building upon a unique innovation ecosystem that has been in existence here for the past 100 years,” stated Michael Alt, director of Eastman Business Park. “Together with NY-BEST, EBP is fast becoming a New York State hub for clean energy technology.”