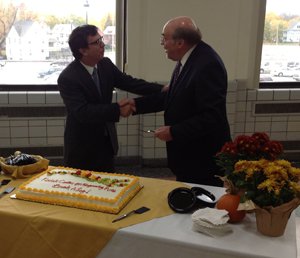 "This is your auditorium, and we hope it will be used as if it belonged to each one of us personally."

These words were spoken to thousands of Kodak's employees by then-chairman, T.J. Hargrave, when the Theatre on the Ridge opened in 1959. On November 7th, the Theatre's new name and identity arrived on stage as the curtain was raised to open a new era for the newly-christened KODAK Center For Performing Arts (read the news release). Now Hargrave's message will be embraced by the Rochester community at large under the direction of the Rochester Association for Performing Arts (RAPA).

What better organization to take over Rochester's largest stage than RAPA – the dedicated performing arts school that has been serving Rochester and its arts community for 35 years. Jim Vollertsen, RAPA's Board President since 2011, has been leading the organization with new management, new branding, and a new Artistic Director, Judith A. Ranaletta.

Last year RAPA hosted a full schedule of programming and began a new partnership with the Hillside Family of Agencies. This partnership may integrate the successful Hillside Work - Scholarship Connection (HW-SC) in the operation of the Kodak Center. HW-SC's Youth Employment Training Academy boasts a 93% high school graduation rate. Students certified through the program join the work force or pursue higher education. It seems that all of these partnerships are truly community focused! What an exciting time.

Presentations were given announcing that Artists Unlimited, a musical non-profit group dedicated to individuals with special needs. In addition, The Finger Lakes Musical Theatre Festival announced a full slate of performances that will breathe more life in the local theatre community and economy.

One of the most exciting moments was when, on stage, attendees received a visual treat: Artists Unlimited's Peter Pan sprang forth through opened doors, flying through the air and spreading pixie dust.

There was a buzz of excitement and the air of a promising future as leaders from each organization spoke, as well as State Senator Joseph Robach and Assemblyman Joseph Morelle.

The new Kodak Center is now uniquely suited to ring once again with music, fantasy, and performance for all of Rochester to enjoy. And, it should be noted, the large parking lot across the street along West Ridge Road, will once again be filled with anticipation for the excitement on stage!

Thank you, Kodak and RAPA, for demonstrating the true purpose of partnership. The new Kodak Center is truly a community collaboration where everyone wins!